I asked each person, “Is there a book that you’ve come back to several times for new insight and familiar pleasure?” Two of the themes that stood out in their responses: literature of the rootless wanderer – adventurer and the loss of family and familial place.  I’ve united the readers and their books with images from the texts to create these collages. 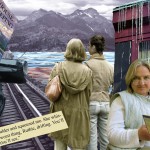 Cassandra: I’ve read it eleven times. I use it to teach freshman English. It has layers I discover every time – the story of family loss, the layered reflections from the lake where the grandfather and mother have drowned, the lake that Sylvie and Ruthie cross on train tracks toward a rootless life of drifting. 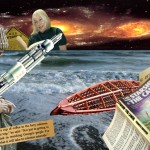 Linda: It’s about Freeman Dyson, an astrophysicist who had plans for colonizing space – such as the Dyson sphere, (well known to Star Trek The Next Generation fans) and his son George who fled academia to build Aleut canoes while living in a tree house in the northwest coast, their differences and their reconciliation. I give copies to friends then have to find another. 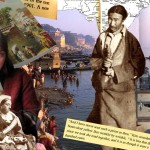 Liz: I read it every few years. I love the freedom of it – the culture, the journey of Kim and the Tibetan lama, his quest for the river of knowledge and the flowing energies of India. I’ve given copies to my children. 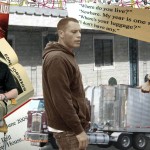 Elliot: They’re light fiction – good guy, bad guy. I’ve probably read eight or nine. Jack Reacher is a former U.S. Army MP who has adventures solving crimes but lives and travels as the ultimate minimalist, owning nothing but a tooth brush and a bank account. 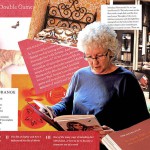 My favorite book, I love Sophie Calle’s chutzpah, her ability to do anything in or out of social norms; going into other peoples hotel rooms, setting up an installation in a phone booth on a busy street corner, trying life as a stripper. The book is a game between her “real” life and a made up fantasy life – but I think her life is her art. I asked each person, is there a book that you’ve come back to several times for new insight and familiar pleasure?” These montages unite portraits of readers with images suggested by their books